After the Xi-Modi Wuhan summit, there is a lot of buzz around the possibility that India and China might take up a joint economic project in Afghanistan.

This prospect has got many people excited. All prominent news agencies have reported this and yet there is little clarity on what exactly this project is all about. The MEA’s press release on the Wuhan summit in fact does not mention Afghanistan at all. The MEA spokesperson has been quoted in Times of India saying that the identification of this project is still in progress. The Hindu’s report vaguely mentions the possibility of a road link to Chabahar from Aynak via Hajigak.

But Praveen Swami in Business Standard has the most clear view about what this project might be. He writes:

Earlier this week, President Xi Jinping and Prime Minister Narendra Modi agreed to explore joint China-India work on a railway line in Afghanistan, with one spur carrying Mes Aynak’s ore to Torkham, and over the Khyber Pass into Pakistan; the other in a great north-western arc, into Hairatan.

I created this google map to understand how this railway line might look like. Please note that this is only an illustration – I have no more details other than the above article. 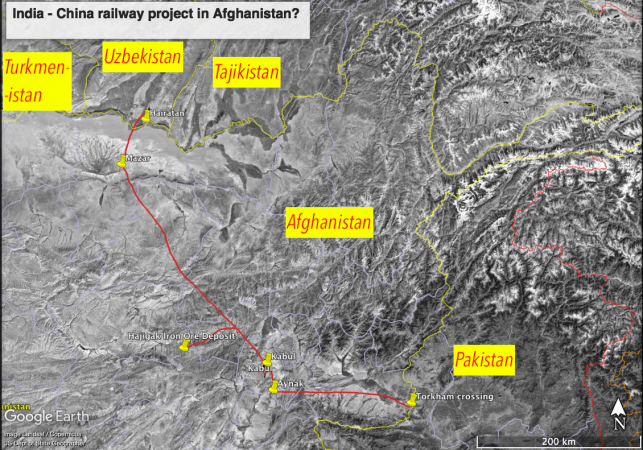 Based on the May 4, 2018 report in the Business Standard [Click to expand]

Won’t such a project pass through Taliban-controlled areas? What is the security situation like in the areas that this railway line might pass through. To check that out, I overlaid the Jan 2018 BBC illustration showing areas under Taliban/government control over the route map. That looks as follows. 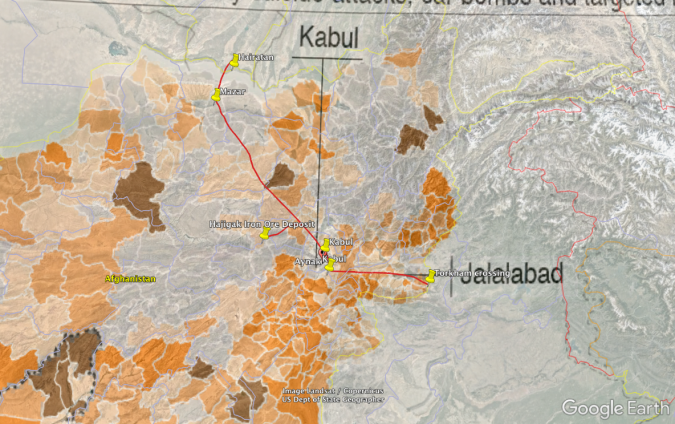 The areas marked in brown are under full-Taliban control. Areas in grey are in full government control. The orange areas are government-controlled areas having open Taliban presence. The darker shade indicates higher risk (attacked at least twice a week). Lightest shade of orange represents areas that are attacked once in three months on an average.

As is clear from this graphic, India, China, and the Afghan governments have a tough challenge ahead of them if they are serious about this project.