Yesterday, a cousin sent me a triumphant WhatsApp message from Munich, a city he has made his own: “Munich named world’s most livable city, again!”

The top city ranking was awarded by Monocle Films, which does an annual ranking of the world’s 25 top cities. Mercer, a global consultancy firm, ranks Munich at Number 4.

No.1 or No.4, Munich’s a gorgeous city, with great museums, a vibrant student life across 16 universities, beer, and above all, the English garden. With 78 kilometers of paths, this is one of the world’s largest urban parks. The Isar river runs through it, and a quirk in the topography creates a standing wave that challenges surfers in body suits. 10 minutes downstream, an artificial island hosts a Japanese tea house. Some of the garden’s architectural features are somewhat kitschy, but the feature that caught my liberal soul was this signboard posted at the top end of a meadow reserved for nude sun-bathers 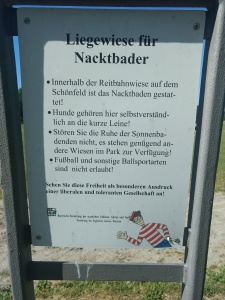 For this one sign board, and the worldview it represents, I hereby nominate Munich as the most tolerant city I have ever visited.

Mohit is an entrepreneur, investor, and economy watcher. He is Chairman of Teamwork Arts, which produces the Jaipur Literature Festival, and has business interests in food processing, education, and a wide range of start-ups.