The government plans to merge four state run banks and then sell 51% of its stake in the new merged bank.  Why not sell 100% stake and divest all bank shares? The banks are a drain on government funds, and the government does not need to be present in the banking sector except as a regulator. Even the PM’s Jan Dhan Yojana does not require you to open an account with a state run bank. A private bank will do the job nicely.

The four banks in question are bleeding money. Their combined net losses were over Rs. 21,000 crore (> US $3 Billion) in the year ending March 31, 2018. If the losses keep piling up and divestment is not done quickly, we will end up in with a situation similar to what’s happening with the Air India sale – no buyers! 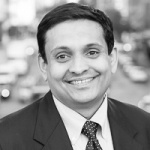 Yazad Jal is Fellow, Economic Policy at the Takshashila Institution.
Previously he worked for McKinsey and IBM in the United States and before that in the non-profit sector in India, last serving as CEO of Praja Foundation in Mumbai. Yazad has an MBA from Yale University and a BA (Econ) from St. Xavier’s College, Mumbai University.