Global oil prices are rising, but still only half of their record high at $75 a barrel. However, the price of petrol and diesel in India is the highest that it has ever been, causing quite a bit of distress to consumers. The knock on effect of high diesel prices, mainly used in transportation, can also be significant. It can have an inflationary effect on the commonly consumed goods and of course makes the visit to the petrol bunk all the more painful for owners of motorbikes and cars.

Simultaneously, in 2014, oil prices came crashing and the government decided not to pass on the entire reduction in prices to the final consumer. Instead, it decided to levy a tax on fuel, which is still in place. Now, with global oil prices rising, and the tax still in place, consumers are feeling the pinch.

So, the government has two options – reduce the tax, which roughly amounts to 50% of the price of a litre of fuel or go back to price controls. The government is preferring the second one. The government has gotten addicted to the revenue that excise duty and other fuel taxes bring – estimated to be about 2.5 trillion rupees for 2018-19. Reducing taxes might severely affect its fiscal health and is thus, favouring the second option of partially reinstating price controls.

Taxes on gasoline is far higher than many parts of the world. It accounts for a bit more than 50% of the final price. There are union and state level taxes on gasoline. Excise duty, one of the major components of federal tax, was hiked nine times between 2014 and 2016. To get an idea, of the Rs. 75 final price of petrol in Delhi, nearly Rs. 39 are taxes.

Price controls on fuel would again damage the finances of the upstream oil companies. In the previous regime of price controls, the finances of HPCL, IOL, etc were in a bad shape. If their bottom-line gets affected, it is again the citizens who will pay for it. It might also worsen the debt situation of these companies, which will affect an already fragile banking system. To give a taste of this, when the fuel subsidies and price controls were lifted, the debt burden of the oil companies reduced by as much as 50-65%. A reversal is not in the public interest.

P.S: Back in 2016, I had written a blog on the break-up of petrol price in Delhi. The main image from that blog is reproduced here and shows the price break up of a litre of petrol costing around Rs.60: 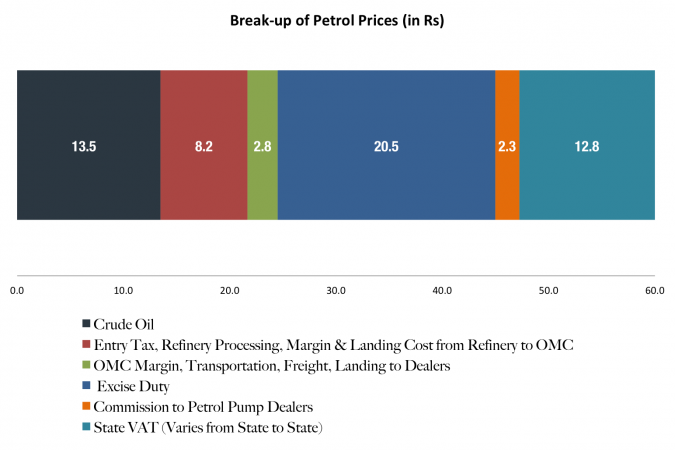